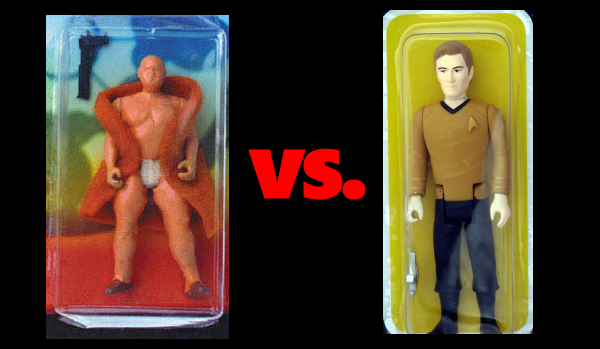 I’m going to start this post off with two completely opposing views – both of which I’m pretty familiar with. Let’s start with Star Trek.

In the episode, This Side Of Paradise, the crew encounters a planet where Earth colonists have been for a few years. These alien spores keep everyone healthy and happy. Everyone is in a blissful state all of the time, and your injuries are automatically healed. It’s an awesome place; some people call it paradise. Even Spock gets all emotional. As a result, no one feels like they have to do anything – they just loll around daily, doing pretty much nothing. Of course, a lot of the crew gets sucked in, and it’s up to Kirk to save the day. After getting back his crew, Bones comments that this is the second time humanity has been kicked out of paradise. To which Kirk responds:

This time we walked out on our own. Maybe we weren’t meant for paradise. Maybe we were meant to fight our way through. Struggle, claw our way up, scratch for every inch of the way. Maybe we can’t stroll to the music of the lute. We must march to the sound of drums

The second quote comes from the Buddha himself. It’s one of the Four Noble Truths:

The Buddha’s quote is often used by mindfulness practitioners and others to suggest that nothing in life can be controlled. If you ask me, it’s a great argument for inaction – there is nothing I can do about improving my life or my business, so I will just float like a leaf on the stream of life. If I get lucky, great. If not, it is what it is. In short, have no ambition; there is no point. Life will crush you if you try to swim against the current. Be happy with what you have.

Lately, there has been this fatalistic streak among people who are starting to feel like they have no control over their lives or their businesses. They willingly think that there is literally nothing that they can do about their lot in life and can never exceed or excel. They say that they try and try, but nothing ever happens – nothing ever changes. They never bother to strive too hard for anything greater in their life. They continually give up on doing anything new and different to change their life or business. They don’t push the boundaries. They don’t make the changes in their lives or businesses which are essential to success.

Whenever they have some free time, they just sit in front of their big screen TVs, watching inane, time-wasting shows. Maybe even Shark Tank, where they laugh at some of the dumb (and not so dumb) inventions which are brought before the “sharks.” At least those people had the ambition to push forward and take the risk in starting and presenting their businesses. Even getting on the air in front of these guys shows guts.

All of those guys may have had a bit of a head start in some ways, but they all had one thing that is very rapidly being drummed out of everyone: ambition. The desire to succeed. The craving to WIN. The urge to make a dent in the universe.

Who knows, that might be one of the reasons Trump won the election. People were desperately looking for something like a win, and all he ever talked about was winning. Whether he will or not remains to be seen.

As Kirk said, perhaps the desire to win, strive for new and better things, progress, and compete against other humans and nature is part of what makes us human. It is a core part of our humanity, which is being stripped out of our culture and personalities by both technology and political systems which are attempting to squash it.

Ambition is what makes us human. Striving to be better, do better, and win is core to us as humans. Instead of trying to suppress that urge, we should enhance it, grow it and celebrate it.

So you are saying, “What, we should listen to Roddenberry instead of the Buddha?”

If not, by all means, flip on that 65″ screen, put on your headphones, and leave the real world.