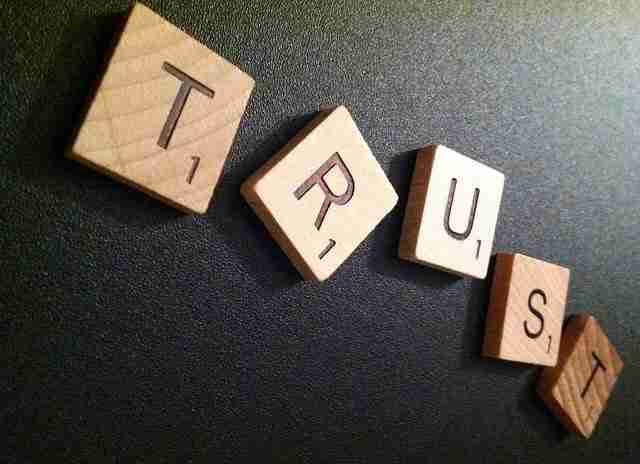 As We Spend Less Time Face To Face, Trust Is Key

In the day before the internet, trust was developed by knowing someone personally. It came out of individuals being in proximity of each other, and if you think about it, at its core, it is built by doing what you say you are doing to do, over and over again. It’s not something you expect to get from someone instantly – trust took time. It took interaction after interaction; you continually, over time, said that you were going to do something, and then you did it. Eventually, you were seen as an individual who could deliver on their promises, a straight shooter.

But who has the time for that now? Being trustworthy takes time, most specifically face time, and we are increasingly moving to a world where we will have neither. The world of work is transitioning to lone solopreneurs working multiple jobs to make ends meet or make big money as independent consultants, micro-businesses, or sharing economy denizens. Plenty of folks are keeping the officially stated unemployment rate low; having dropped out of the old-school typical “workforce” completely, they don’t show up on government statistics radar.

Take Uber, for example. Both the driver and the passenger are rated and reviewed. No longer does the business only have a stake in the game – while Uber does hammer those drivers who don’t provide a good experience, those problem customers don’t get away with it either.

Think of how many small businesses live and die on their Yelp reviews? Does anyone ever make a decision anymore without researching online first? But in this case, the focus is on you.

When the internet began, many people were concerned that many would want to remain anonymous in their communications, thus giving them the protection to say and do all sorts of horrible things. Sure, that is an issue – anonymity gives us wonderful freedom to express ourselves without fear of retribution. There are outlets for that, and some of them are doing quite well.

However, I think that the opposite will now slowly become true, and it started with eBay. The difference between an eBay seller and a typical internet user is that they can’t do any business unless trusted. eBay pioneered the “everyone should be rated” model by rating both the buyer and the seller. They were the vanguard, and it took 20 years for that model to start to spread finally. Instead of being anonymous and invisible on the internet, we want to be visible and known. We want to be a beacon of trust.

How can you trust someone these days? Someone you have never met? We desperately need a system that can circumvent that long set of face time that we typically need to gain an individual’s trust. We need systems that can mine for actions, movement, ratings, and reviews, to come up with a “Trust Profile” (or what I like to call a trust quotient, which like a credit score) that can assist you in determining if you wish to deal with a specific person, or not. This Trust Quotient should blend ratings, reviews, social network activity, communications, and activity monitoring. Both human and machine inputs into an engine that can say, “Yeah, when it comes to that, this is a good guy.”

As I’ve said before, all work is becoming personal. Each of us, individuals, are becoming atomic units of work who complete projects alone or band together with others over the course of a project. As cycle times shorten and new ways of creating take less and less time, we need to either a) build a team we work with over and over because we can trust them to deliver or b) be able to rapidly build a team of trustworthy people to knock a project together and truly shine.

For this to happen, we need to be able to calculate how trustworthy a person is rapid. Let’s say it’s you. We would first ask your friends all about you: what you are like on a hundred different vectors. We can do this by directly rating and reviewing you or monitoring their social media posts about you and even everything they say about you privately. We then track your communications and actions over time – but we have all of that information already – since you’ve been leaving a trail all over the internet – both public and private. It’s simply a data-mining exercise – we develop a super accurate persona of you. How you would act in every situation, you have ever been in (all already tracked somewhere, remember).

Once we have that, all we have to do is ask: can I trust Chris with X? Of course, there could be one blanket trust quotient that you use if you are looking to choose a mate or life partner since you will be spending many aspects of your life with this person. But for other, more narrow slices, you can ask for specifics: is he neat or sloppy? Is his code bug-free? How many times does he check in a typical build? Is he organized or not? Does he get a good night’s sleep? How’s his diet going? These questions can tell us: how much we can trust this guy, even though we have never met him face to face.

I believe that one of the things holding back our ability to innovate rapidly is the ability to develop trust quickly.

It’s time we made trust a measurable, open quantity.