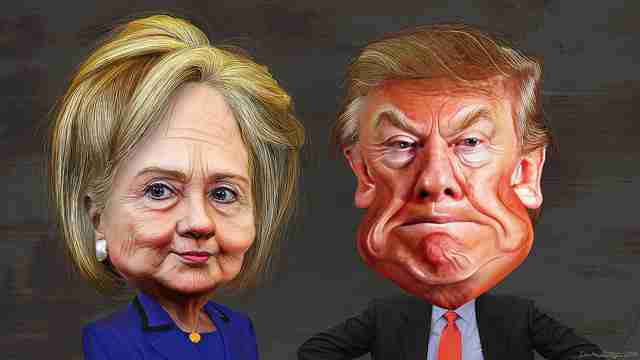 How do Hillary Clinton and Donald Trump fare on Innovation?

Let me start out this post by stating unequivocally that I am not voting for either of the above, lest you may feel that I have a leaning one way or another. As I’ve mentioned many times before, I am a libertarian, and unlike Peter Thiel, the billionaire who appeared and spoke for Trump at the RNC, I support neither of the major candidates. I used to be very political but have stepped out of speaking about it or being very interested in it since around 2012. I stay away from talking about politics because I don’t watch hockey anymore – trying to keep my blood pressure and heart rate in a normal range. But I digress.

A few weeks ago, 145 tech leaders from Silicon Valley signed a letter stating that Donald Trump’s policies would be a “disaster for innovation” – mostly citing his policies on “immigration” (which, like most people, they don’t delineate between illegal and legal immigration, a distinction, if you ask me, as a legal immigrant, which is extremely important) , laying out a “tech agenda” (which, if you ask me, the state should stay far away from doing – private companies do a much better job at that, thank you), shutting down parts of the internet (which everyone know is pretty impossible, with the right tech you can get around any shutdown – they put that in as indictment of his understanding of the internet – remember it is a “series of tubes“), his hostility towards the media (not sure what Trump’s feelings about the media have to do with innovation at all – the mainstream media already knows that American’s are rejecting it for internet sources because of its biased nature), trade deals (he sounds protectionist, but is he really – when he asks for better deals?) and finally just a general statement on divisiveness. As a libertarian, I can smell these a mile away, a pretty standard list of Democrat grievances.

Let’s talk about a few things that Trump mentioned that might be good for innovation: reduction of regulation, school choice, and breaking up cronyism. As I’m going to make the case in my upcoming book “So, Where’s My Flying Car?” one of the main reasons we don’t have flying cars, self-driving cars, and the like is that our society is so obsessed with being “safe,” that we don’t take the risks we need to in order to innovate. He did lightly mention reducing the amount of regulation. However, safety is another big deal to the Trump side; too much “safety” is definitely bad for innovation. School choice will help up-and-coming intelligent future innovators to maybe get a better education, which will drive innovation. My last point is that he did mention something about taking down cronyism in big corporate interests and government; if any of that is true, then maybe dismantling some of that might help the rest of us innovate.

Let’s see what Hillary has got going on the Democrat side to be fair and balanced.

One of the key changes which occurred on the innovation front over the last few years happened on the patent front. President Obama signed the America Invents Act, which brought our patent system into line with the rest of the world. Unfortunately, what it ended up doing at the same time is making it more expensive and difficult for inventors to protect their ideas since now they need to be filed with the patent office in order to receive a “priority date,” which is the supposed day the invention came into being. This proves who came up with the idea first. Prior to Obama signing the act, all you needed was a way to record that you came up with an idea on a specific date, like in a paper notebook or something. Sometimes I like to call it the “patent attorney job creation act” since you now nearly always need an attorney to file your invention in order to properly protect it. For more on this, see my post on  “What kind of ideas can I patent?”

On the plus side, he also signed into law the JOBS Act, which, among other things, returned to regular people (and not just the rich) to invest in startups. This is a good thing, opening up a huge new market of investors to the world of startups. While it took a long time for the SEC to implement the rules, we can all now invest in startups.

On the downside, the regulation would be up for a huge increase, all in the name of protection. The more regulated business is, the less it has room to innovate. They also seem to look to Europe for their inspiration (where the economies are slowly sliding into despair) as opposed to Asia (where economies are doing incredibly well). How will we innovate in the pursuit of protection and the doling out of entitlements?

There is a lot of talk about UBI, or Universal Basic Income, fueled by fears that robots and automation and the new sharing economy will kill jobs for humans. Some people even say that UBI will free people up to be more innovative since they will have a lot of time to think instead of work. However, every UBI “experiment” has failed to develop anything like that – when people are given everything they need to survive, they can, and will, simply do nothing.

I prescribe to the James T. Kirk school of innovation. As he so eloquently put it in This Side Of Paradise, human beings need to be challenged. Struggle drives innovation:

Maybe we weren’t meant for paradise. Maybe we were meant to fight our way through, struggle, claw our way up, scratch for every inch of the way. Maybe we can’t stroll to the music of the lute. We must march to the sound of drums.

For example, many on the Democrat side deride innovative new companies like Uber, Airbnb, and others who upend the old work model and create new, customer and provider-friendly businesses that break down the old guard that has been supporting the status quo. These new sharing economy startups create whole new worlds of work, completely disconnected from the old 9-5 or factory shift work, thus endangering the whole entitlement system infrastructure. Plus, they tend to blow up the labor unions and other standard supporters of that party.

Unfortunately, neither candidate can truly say that they will be the innovation president. This is sad because if you ask me, the root cause of everything that ails us, from immigration to terrorism, to the economy, to jobs, to security, to prosperity, can all be solved by innovation.

A party and president who puts innovation above all else can truly be the one to set on the right path to re-becoming the ideal state as set forth in the constitution. And neither fit that bill.