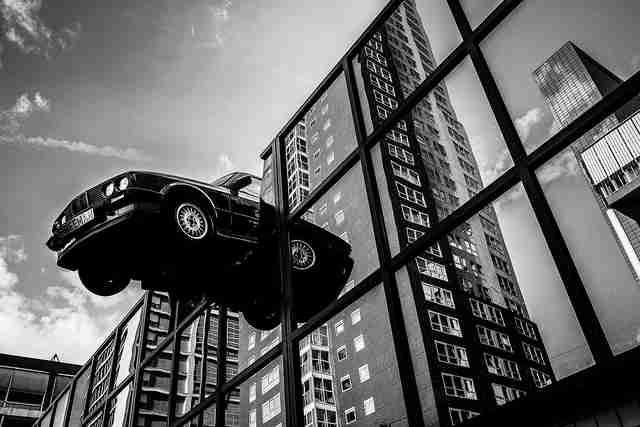 Having a great conversation on Singularity Hub on the existence – or non-existence – of flying cars at this seemingly late date. I started with – would you prefer flying or self-driving cars? To whit I said:

By now we should have self-flying cars!

Seriously. Personally, I think we are way way behind where we could be, and the only thing that is holding us back is OURSELVES.

Remember the turn of the century when we were inventing human-made flight? We went from the first gliders in the 1880s to the invention of the jet engine in 1930. 40 years! We went from 0-60 in no time flat, but since then, we’ve slowed to a crawl. The old predictions were prescient that we would have flying cars by 2000, but they never figured that humanity would get so timid.

There were few rules and regulations on where you could fly or what you could do back then. Sure, people were hurt and killed, but they took full responsibility for what they were doing, and things moved forward. Now, we are bogged down in an innovation stagnation of our own doing.

It’s like an ethicist telling me that maybe we shouldn’t even try to figure out how to live to 1000 because we might not like it. I say who cares! Let’s find out if we can do it first before deciding whether or not we want to.

The discussion got very interesting – with one side talking about how we have to get through all the “boring” stuff like making sure that it passes all of the government standard tests and airports and municipalities and taxes, and the rest wondering why.

There’s been many articles and books about how innovation has stalled – remember The Great Stagnation argument that all the low-hanging fruit has been picked? IMHO, that’s bull crap. We haven’t been innovating because we’ve decided not to take risks in our overly protective society anymore. We are more concerned with getting there safely than we are concerned with getting there, period.

So here is my modest proposal: you know how various places in the US have created entrepreneurship “zones” with lower to no taxes to collect businesses and encourage economic development? Well, I suggest that we create “innovation zones” around the country where the normal laws and regulations of the country are suspended, as long as those people who go there and perform experiments in those spaces understand that they could get hurt or killed and will not hold anyone liable for it. These places would support innovation development.

How different is it really than signing a release from the bungee jumping company before you make that jump?

In these Innovation Zones, I’d bet you’d get not only all sorts of inventors and innovators, but you’d also gather tons of free thinkers as well – get not only real-life products like the flying car but also interesting IP as well.

If we don’t do this here – what’s to stop other countries from doing the same thing? There are plenty of places in the world where the lack of regulation is greatly accelerating innovation. Look at Africa, for example.

If we don’t do this, we’ll be left behind. Not only were the explorers who first discovered the new world not bogged down by regulation and safety, but they also enjoyed the first spoils of the New World. We can do the same – minus subjugating the locals, that is.

If that won’t work – let’s seastead it! I can’t think of perfect use for an old oil rig or some remote deserted private island.

Thkeyey is to ensure that no one goes there against their will – everyone agrees to a contract which holds no one but the individual responsible if anything should happen to them while they were “experimenting” – and I’ll bet that we’ll finally see some rapid, rapid innovation as we did at the first part of the last century.

There’s no one holding us back but ourselves. Let’s fly.