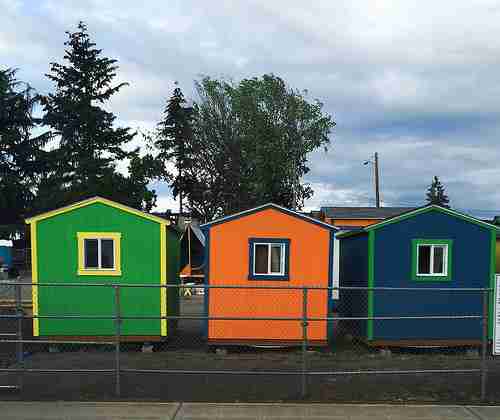 The Solution to the High Cost Of Housing Is Modular Tiny Houses…But Will They Be Allowed?

Here in the San Francisco Bay area (and likely in many other urban areas) the cost of housing has reached levels of ridiculousness never before seen. As I write this, the minimum rent – yes, the absolute minimum rent, for a tiny studio apartment (they just made it legal to make apartments as small as 250 sq ft), is likely a very bad neighborhood, is $3500. That means that you need to make a minimum of $100,000 a year to survive with some comfort to live in San Francisco. Insane.

Many people are pretty unhappy about this. Plenty is contemplating leaving. Others are sleeping in vans parked on or near the campuses of Google and Facebook. Two-hour plus commutes each way are commonplace since this crazy market is also coupled with nutso management schemes like forcing workers to commute in every day. It’s an absolute mess. From exs being forced to live together after their relationships sours, to people being forced to pack into dorms even after they’ve left college and should be on their way to adulthood, there is something definitely askew here.

As usual, there are plenty of solutions. There are many ways, but there is no will.

Plus, like most of these problems, we attempt to solve the symptoms, not the disease. Instead of looking at the highest level and looking to change the root core of the issue, and therefore solving all manner of problems at once, we peck away at the details. For example, I was at a fundraiser once when I met someone who was discussing the need to add more public transit in the Los Angeles area so that workers could get from far away cheaper housing into the more expensive areas. Instead of looking at the why (why do we need these workers to commute at all), the local politicians focused on the project itself. It becomes less about solving the problem than “what can I look to make it look like I’m doing something about this in my short term here.” We have to stop looking at expedient solutions and look at the bigger picture.

As a child would, as a beginner mind would, we have to start saying, “Why?”

First, why live in the Bay Area at all? Using our current level of technology, shouldn’t we be able to live anywhere in the world and work just as effectively from there? With the tech we have today, we can virtually live elsewhere and still work like we are really there. Why not install high-end 4k or higher monitors along a wall, HD cameras, and create a virtual space which lives in both one location and the other? I envisioned something like this in 2007 (How I Moved To Africa & Kept My Job). No telecommuting rules, no matter the reasoning, truly reduce the quality of life. As someone who’s worked both from home and commuted, I can tell you that working from wherever you are is productive and helps foster innovation.

Secondly, let’s say that you need to be here since your job requires physical presence. How much space does a human being really need, and what kind of space do they need? Do we really need people to have 4000, 3000, 2000, 1000, 500, 250, or even 125 sq ft of private space? Let’s look at all corners of the world and truly figure out how much space and what kind of space a typical human needs to survive and thrive. Can we survive in a private bedroom and bathroom but then do everything else communally? Or we can look at the individual needs of humans, human families, and human groups and then create some kind of modular tiny houses in order to accommodate them.

We have to take a long, close look at how we’ve always done things and realize that there are much better ways of doing what we need to. Instead of living in a dorm, then in an apartment, then in a starter house, then in a family house, then downsizing into a smaller house or an apartment, or a nursing home as we move through the phases of life, what if we lived in modular tiny houses that expanded and contracted as we need more and less space? Like LEGO block homes or modular, modern, manufactured housing, one could maintain the same “room” all of their lives as the “house” changed around them.

We can even envision that this “room” can even be mobile – modular tiny houses or rooms which we can move from place to place, connect with other rooms in many different ways, plugging them in and out and moving them around to fit into the environment that they are in. Your room can be plugged into a ranch-style collection as you live in the country, and then move with you and be plugged into an urban high-rise when you get to the city.

Nothing really holds us back from implementing this vision other than governments and citizens in these cities who don’t wish to change anything. These are the folks relishing the increasing costs because they don’t have to pay them – it’s not their problem because their property values continue to increase and, by extension, government property tax coffers.

Of course, this is not, in the long term, sustainable. Cities, like humans, can get atherosclerosis when there is no flow of new residents into a city, bringing in new perspectives and visions. Additionally, the high demand cannot go on forever – eventually, prices will get to the point (if they haven’t gotten there already) of driving most of the less affluent, younger residents away. Eventually, residents will move, and prices will drop when demand fizzles away. Not a good thing in the long term at all.

The solution, as I said, is simple. All it takes is the will of governments and citizens to make room for these new ways of living. Creating co-living spaces, utilizing empty land by dropping portable living units, sharing currently usable land, and allowing people to rent out parts of their property to tiny house owners can all happen if we just let it.

Lift zoning restrictions, let people be, loosen the rules, let innovation in housing occur, and we can easily have affordable housing everywhere.