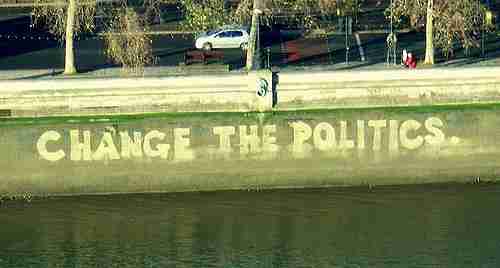 Let’s talk about the Politics of Innovation.

To that end, I was suggesting that one of the things that will help assist in the development of new innovative products and services is deregulation.

Here’s an example.  Look at banking.  Banking in the United States is extremely heavily regulated.  Therefore, it’s very difficult for banks, no matter how innovative they are internal, to be able to launch innovative new products externally because they must deal with a lot of regulation and compliance issues.  Go to other countries like Kenya, where the banks have been able to do all sorts of interesting and amazing things with mobile banking because the regulations are laxer.

I talked about this in a previous post about permissionless innovation, where you push forward into areas where there are no laws, the laws can be bent, or the laws can be stretched to get that innovative product service out the door. Why can’t the administration encourage more innovation by requiring less permission in the first place?

Of course, it doesn’t inhibit you from just thinking about innovation: if you want to develop patents in that space, that’s completely fine. Strengthening the patent system so people who do come up with ideas are protected and can do something with those ideas would be helpful here.

Secondly, some innovation makes people queasy.  When you see something extremely interesting and innovative, people get uncomfortable.  They get a little queasy about it and are concerned that their ethical or sensual filters kick in.

Think about the future of water use.  Here in California, we have a drought, and it’s raining today, so hopefully, it will reduce over time.  In one of my previous blog posts, I talked about a scientist who hadn’t taken a shower in twelve years.  All he does is spritz himself with this anti-bacterial substance, and what it does is destroys the bacteria on his skin. He’s used very little water over the course of the last twelve years.

If you think about it, that is the future of showering. Do we really need to use as much water as we do to be clean?  Can’t we have a high-tech shower that uses some water and some biological elements that kill the bacteria and then blast us with this thing for a couple of seconds, cleaning us completely, and then we step out again?

But some don’t like the thought of peppering ourselves with bacteria, it makes a few people a little queasy.  Feeling uneasy about something may mean something is actually more innovative.

Hundreds of people tried, and a lot of people were hurt or killed trying to get off the ground.  A lot of people died attempting to fly.  If you think about the risk-taking that was done at that time as opposed to today, I cannot imagine many (or any) people taking that kind of risk to determine whether we could fly.

We live in a completely different time where people are more concerned about safety than innovation.

Ethics are one of the reasons why the FDA takes so long to push drugs through the system. They must test every possible situation, and it takes forever.  Even though there are many people waiting in the wings, who need these cures.

People are not willing to take risks anymore. I think an administration encouraging people to take risks, temporarily suspend some ethical thinking, and create breakthrough innovations would be extremely helpful.

The last thing that I would suggest is something that I’ve called Innovation Zones.

If we are too queasy to deregulate and bypass our ethical filters all over the country, I would set up some specific areas where people can go and do these risky things.

Basically, what would happen in these areas is that restrictions and laws are lifted. People who wanted to could travel to these innovation zones and, upon entering them, would sign a waiver saying anything that happens in this zone is their complete responsibility. If they were to be disabled, hurt in any way, or even killed, they take full responsibility for this.

They would be free within these innovation zones to do all sorts of things that may be illegal outside of the innovation zone.  They could create breakthroughs in many areas that would never be able to due to the laws, regulations, and restrictions elsewhere.

I’m not trying to suggest that we kill or hurt anybody.  We just need to recapture that same spirit that we had back at the turn of the last century when people were willing to take the risk to create new forward-thinking innovations.

We need to bring that sense of adventure, excitement, and disruption back to our country, and hopefully, that’s something that we can see from this incoming administration.