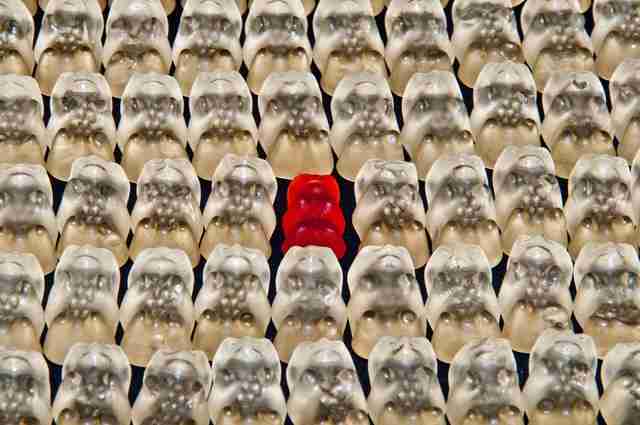 Being Different Is The Right Move

While crowds can be powerful, in many ways, they are like herds. Moving and possibly thinking and acting alike. It also made me think that a herd-like mentality is the last thing you need when you are trying to be innovative. Despite that, there are plenty of scenarios that I’ve seen where companies within an industry, especially those in the middle to the back of the pack, typically those who are most desperate for some innovation to help them break out, insist on remaining in the pack.

They understand that they need to innovate. They’ve either come to that understanding on their own or there’s some disruptive external force which is causing them some pain and this pain is forcing them to be more innovative. These middle to back of the pack companies look at the goal of anything that they do as innovative is to simply move them further up in the ranking against their competitors.

If you ask me that’s wrong thinking. It’s wrong thinking to simply try and catch up to where your competitors are. They are already ahead of you, and unless something major happens to them, you will remain where you are. Sure, you may move up a rank or two but are long as you compare yourself to them, you’ll never top out.

You need to be different.

When you’re in a competitive marketplace people think that you must go in the exact same direction as your competitors. You shouldn’t be thinking about catching up with your competitors if you are not in the lead already.

Sony and Microsoft were in a processing speed power war when Nintendo released the Wii and blew open a whole new way of gaming with their motion controllers. In third place, they decided not to play that game in that space and created a new space, which they led, and Microsoft and Sony had to scramble to catch up. (Of course, since then Nintendo seems to have forgotten the lesson that once they lead in a space, they shouldn’t pivot again)

When you are in a horse race, and you can’t catch the lead horse, it’s time to carve a completely different track. Blow out your competition by playing in a completely new field.

I’ve mentioned before that there is a lot of innovation happening in Africa due to the lesser amount of regulation and the lack of the baggage of having all that landline infrastructure around. Instead of following other countries progress by putting in the landlines first, they went straight to mobile and could leapfrog into space ahead of us. We could probably benefit from some of that innovation here.

In Africa, they didn’t think about being number one. They thought about going beyond number one by purposely doing something that was markedly better than what we did.

Don’t just be content to be number one. Think about what’s next, what’s after number one, what is beyond begin the number one guy in that field.