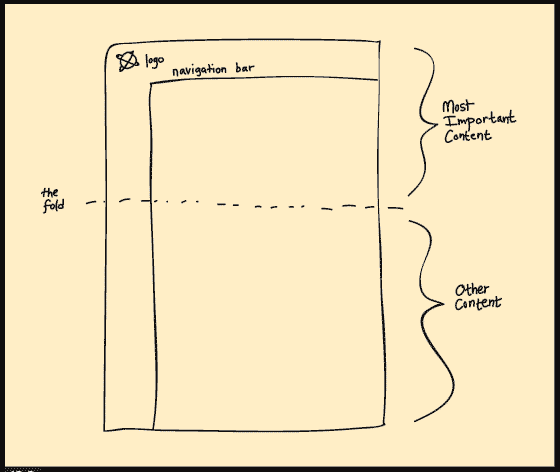 You aren’t seeing this text when you first come to this site. Even though this is a blog post, and arguably the TEXT of the blog post is the most important thing, you aren’t seeing it. You are probably seeing a giant graphic, a slider, or something. You aren’t seeing the text. We are now in a below-the-fold world – everything is SCROLL DOWN TO SEE MORE…

(BTW, clicking on the arrow above does nothing, but will that stop you?)

I’ve been reviewing a ton load of WordPress themes and other various designs lately for a number of different reasons, and I’ve been struck by a strange feeling. I’ve been looking at websites for oh, maybe 20 years now and have seen them go from HTML 1.0 (remember that awesome grey background that they all had back at the beginning – you don’t do you?) to what we have today and obviously, things have changed for the better.

Whether it’s a simple landing page type site or a fully interactive web app, it’s extremely important to get design and usability right: simply looking at a company’s website could make the difference between a sale and a no sale. No site is better than a crappy site for some small businesses.

Here’s the brunt of my strange feeling: I remember when I worked for a web design firm from 1999 to 2003 called OnlineFocus (now defunct – they had the audacity to let all their salespeople go one day, figuring that they didn’t really need to have any more clients than they already had). It was a great experience – we had real designers and UX people on staff and built some awesome sites for companies like FedEx and Sun Microsystems.

I’m not a designer, but I hang out with them sometimes (a lot more often back then) and listen to them talk about design and usually agree most of the time – as a tech guy, I’m usually more interested in making sure that stuff works but I can concede that stuff looking good as now equally as important as it works. One of the key things I do remember from those days is the importance of the most important stuff on the web page being above the fold, an old newspaper term which meant just that – when you fold a newspaper (you remember those things only your grandparents used to read, right?) it was stuff that was above the fold (duh!) which typically was the most important stuff. The headline, the photo (used to be small, but it is now huge – I wonder when we’ll do away with text altogether), all the important stuff is above the fold.

It was that way for the web as well. For a very, very long time. From the beginning, until oh, I don’t know, maybe around now, there was a very strong design direction from every web designer I know to put the

SCROLL DOWN TO SEE MORE

…most important stuff is above the fold. (see what I mean, isn’t that dumb). But as I go through design after design, all I see are these giant splash images, and you have to SCROLL DOWN TO SEE MORE.

Is this just me being an angry old man? Or are you as annoyed about this as me? When I was looking for a new theme for this blog, it took me forever to find one I liked, and even this one has a big ass slider! Someone, please tell me that I’m not the only one who’s sick of SCROLLING DOWN TO SEE MORE…

a website is now a story telling tool. Unlike print, users can interact with the media in so many different ways. But, just like print, storytelling is still (and always should be) the main focus. Elements above the fold is supposed to help set the tone of the website. Very much like an establishment shot in any film or TV show. To set the tone, web designers use a “hook” for the copy, imagery or video to add personality, and maybe some supporting copy. All these things are “teasers” to help make the user want to scroll down and read… Read more »