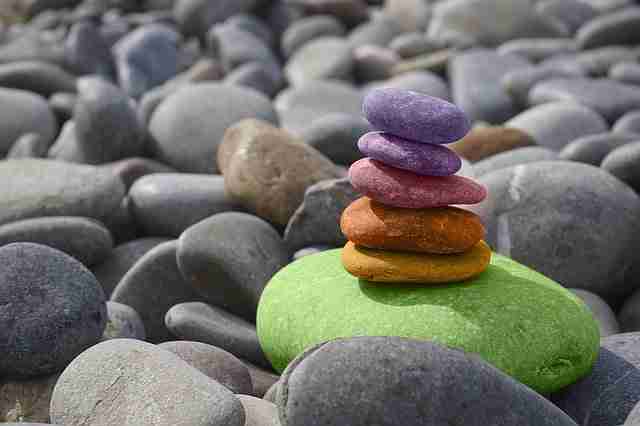 The modern world has filled us with stress since we really haven’t evolved far from tribes wandering the savannah.

Once you cast your mind back to that time and think about what surrounded us and affected us then, then you will understand actual reality. Almost everything that we worry about, about everything which depresses us and stresses us, is something we have, as human beings, just invented. Let’s say that you are stressed about being late for work to a job in the city center from your home in the suburbs. Cars, suburbs, and even time are all human inventions.

Did you know that time used to be different everywhere, and only with the advent of the steam engine and locomotives did the world adopt a “time standard”? That 2:00 pm meeting is a figment of human beings’ fertile imagination since even the concept of 2:00 pm is not real. It’s just something we came up with. You are yourself, how far down the rabbit hole can we go?

The reality: the physical world of nature is real. The day and night are real. (Weekends, weekdays, weeks, months, years are not real – they are all days, we just came up with ways to classify them (workday/non-workday). Everything else, from money to religion to business to governments to politics, is a figment of human imagination. Some humans, somewhere and at some time, just came up with all of these things.

Do we ever release ourselves from the grip of all of these constructs? Sometimes. When we go on vacation, if we purposely do not plan, set alarms, wake up when our body tells us to, eat when we are hungry and sleep when we are tired, doing whatever we want whenever we want, without any obligations to anything or anyone, we may, for a short while, feel this actual reality. When you lose track of what day it is, when you lose track of time, that’s when you feel it.

For some, it’s liberating, and one of the main reasons people take vacations. For others, it frightening to disconnect from this safe, modern world. I’d argue that one of the reasons we are so mentally and physically ill as a species is that we spend too much time in a world, which is a figment of our imagination instead of the real world.

This is one of the reasons a walk in nature is an almost universally positive experience for all humans. What is my point here? My point is that if we spend too much time living within the structure of other humans’ imagination, we spend too late time cultivating our own. Instead of creating our own reality, we lean on different realities.

We consume instead of creating, which atrophies our creative muscle (which we all have, no matter those who claim not to be creative) when we give up on our own imagination and allow the rest of humanity to wash over us. Is it any wonder some feel powerless against this world and end up in depression or aggression against it? Solving this requires that we free ourselves from the restriction of these “figments” and allow our minds to roam free. When we do this, we can unleash an amazing raft of creativity from our brains.

Simply step back from all of these restrictive human figments and you can envision anything.